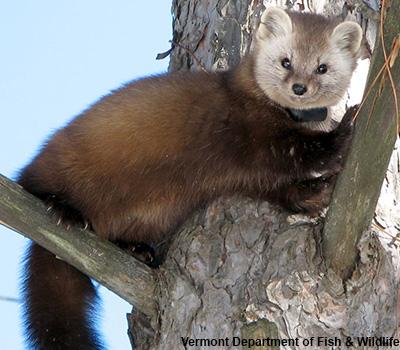 The American marten is one of many important species of predators that play a key role in forest ecosystems. American marten are threatened by land use changes and habitat fragmentation. Much of the habitat in their historical range was deforested and turned into land for agriculture or for human development. This caused their populations to decline from the late 1800s through the early to mid-1900s. In Vermont, the last native marten was detected in 1954. Since the late 1900s, American marten have been recolonizing parts of the Northeast. In 1989, a reintroduction attempt was initiated to re-establish a marten population in the Green Mountain National Forest in southern Vermont.

Researchers from the University of Vermont examined genetic structure of martens in the northeastern US to determine whether the reintroduction attempt was successful. Earlier research suggested that a viable marten population had not been established, until a marten was detected in the area in 2010. Researchers began genetic work to figure out where that marten (and several subsequent martens detected in the area) came from. They collected marten genetic material like hair and tissue samples from New York, New Hampshire, southern Vermont, northeastern Vermont, and Maine, then used genetic markers to determine relationships between populations.

The study found that the martens in southern Vermont were most likely descendants from the reintroduction attempt, which means that 1) the reintroduction was indeed successful and 2) martens remained in that area undetected for nearly 20 years.

The study also found other regions where martens were presumed to have recently recolonized after decades of extirpation, such as the western Adirondack Mountains in New York, but the genetic data suggest that martens were there all along. Researchers hypothesized that marten populations are more resilient than previously thought, and can persist in cryptic populations for decades. However, researchers detected an overall loss of genetic diversity in the region, which may be a negative repercussion of historical population declines. The population in southern Vermont is likely very small and researchers believe connectivity with nearby populations will increase the probability of long-term persistence.

Overall, this study improves understanding of the history of American marten populations in the Northeast. The study specifically increases knowledge on the subsets of native genetic diversity of the American marten and informs regional conservation actions. It also highlights the value of long term genetic monitoring to evaluate reintroduction success and regional gene flow.

Department of Biology, University of Vermont