How Might Vermont Forests Look in 200 Years Under a Changing Climate? 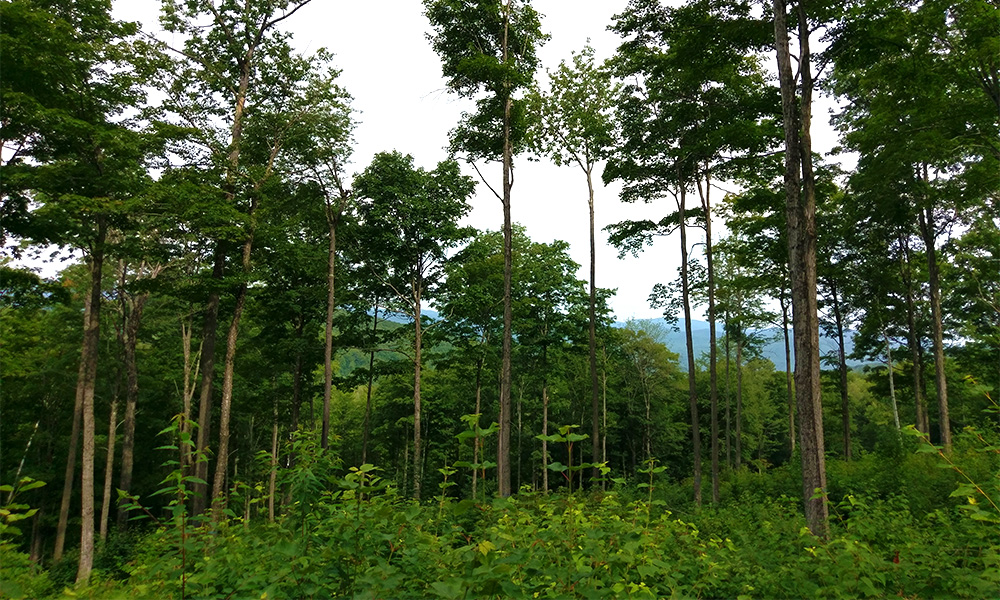 Global change is the greatest challenge facing forest managers today. The uncertain impacts of changing climate, increasing disturbances, such as extreme weather events and pest outbreaks, land use and ownership changes, and fluctuating markets and demands for forest goods and services have led resource managers to look for alternative ways to maintain healthy, productive forests into the future.

Climate change is shifting global and regional temperature, precipitation, and disturbance patterns beyond the historical trends of variability observed over the last two centuries. In the northeastern United States, climate trends over the last century show rising average annual temperature, increased precipitation, and a greater prevalence of extreme weather events.

These trends are projected to continue and intensify in the next century. A warming climate and changes in occurrence, timing, frequency, duration, extent, and intensity of disturbances, such as wind or ice storms, droughts, or pest outbreaks, can stress forest ecosystems and cause tree mortality, resulting in significant changes to forest ecosystems and suitable habitat ranges for tree species.

Scientists remain unsure about the degree to which tree species or forest community types will actually shift their range in response to these changes. Some research shows tree species’ ranges moving northward as temperatures increase.

Researchers and managers are also still learning how forest change might be influenced by adaptive management strategies designed to address climate impacts. Forest managers may increasingly include adaptive tactics, such as planting of climate suitable tree species, into management plans.

In a new study, researchers at the University of Vermont Rubenstein School of Environment and Natural Resources used a forest landscape simulation model, called LANDIS-II, to evaluate impacts and interactions of climate, timber harvesting, and adaptive forest management techniques on future forest composition of a landscape in southeastern Vermont. The team looked at three climate scenarios and three forest management approaches.

In addition to the current forest management being used on properties in the study area, the researchers considered two alternative adaptive forest management practices. For all treatments, researchers used input from local managers and other partners to design scenarios representing current and potential future approaches to sustaining forest ecosystems in the region.

The first alternative method would promote an increased diversity of tree species, age classes, and adaptive responses among tree species to projected climate changes. This treatment included group and patch cuts with large openings to allow for a wider range of shade tolerant species to become established.

The researchers modeled 26 of the most abundant tree species on the landscape, simulated the landscape dynamics for 100 and 200 years into the future, and included current climate conditions and two climate change projection scenarios: extreme warming and moderate warming.

The researchers found that climate change is likely to cause shifts in forest composition, or the relative biomass or abundance of each tree species, in the northeastern United States over the next 200 years. The extreme climate warming projection resulted in more significant species shifts and reductions in landscape-scale tree biomass at the end of the 200-year simulation when compared to the more moderate warming projection and current climate conditions.

Sugar maple, American beech, and eastern hemlock are currently the three most abundant tree species within the landscape. Although sugar maple is projected to increase in relative biomass over the next century under all climate scenarios, the model shows a decline in the species over the next two centuries under current climate conditions which allow competing tree species to perform better. Under the two climate change scenarios over the next two centuries, sugar maple is expected to remain a prominent component of the forest composition.

American beech is projected to increase in relative biomass over the next 100 years. The model shows a decline by the end of the next two centuries under current climate conditions, but an increase under the two climate change scenarios.

Eastern hemlock would be expected to increase slightly under both changing climate scenarios but increase rapidly by the end of the next two centuries under current climate conditions if the pest, hemlock woolly adelgid, is held in check. Red spruce is projected to increase some in relative biomass under current climate conditions, but a changing climate could limit the abundance of this species in the future.

In the absence of large-scale disturbance or dramatic alterations to forest management regimes, current forest composition remains largely unaffected for the next 100 years. In contrast, over the next 200 years, climate is likely to play a much more important role in shaping the species composition and health of northeastern and Vermont forests. Unfortunately, these shifts could generate forests that are less diverse if climate-sensitive northern temperate species experience major reductions in relative biomass.

These findings highlight expected lag effects of a changing climate, which make it challenging for forest managers to sustain critical ecosystem services in the region. Because of the limited effects observed from the adaptive management scenarios simulated in this study, the authors suggest that the scale of forest management intervention may need to be greater than current applications of adaptive management tactics.