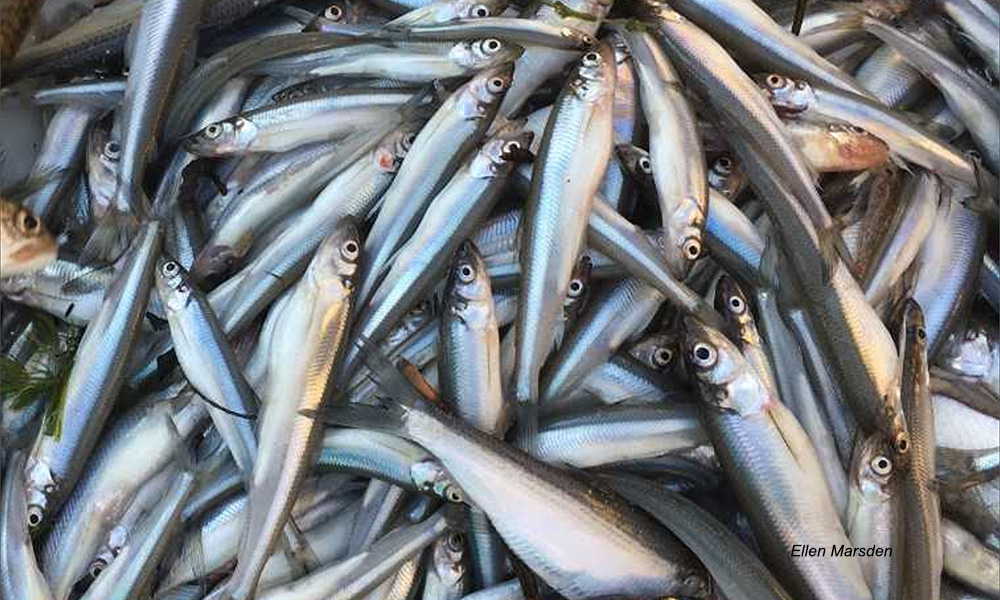 Invasive species can have a range of impacts on native food webs from barely any to major disruptions. Interestingly, the impact of species introductions and whether they will become invasive appear to be ecosystem-dependent. Habitat conditions could be important in understanding the impact of invasive species, as discovered in the study of two fish species in Lake Champlain.

Rainbow smelt and alewife are two important prey fish which naturally occur and coexist along the Atlantic coast of North America. They also coexist without negatively impacting each other in the Great Lakes, where they became established in the early 1900s. The situation is different in Lake Champlain, where rainbow smelt is the dominant native prey fish, while alewife is non-native and has become invasive. Alewife were first discovered in Lake Champlain in 2003 and became abundant by 2007.

Besides rainbow smelt, the native prey fish community in Lake Champlain consists mostly of trout-perch, slimy sculpin, and cisco. Such lack of diversity means invasion by alewife could have large effects on prey fish populations. The presence of both rainbow smelt and alewife in Lake Champlain motivated fisheries biologists to explore the dynamics of the two prey species—one native and one invasive—in a large lake ecosystem with several diverse basins.

Lake Champlain researchers, led by Rosalie Bruel, a former postdoctoral associate at the University of Vermont, set out to determine if and how alewife invasion impacted native rainbow smelt in three different basins of the lake in a study published in 2021. They used data from the Vermont Department of Fish and Wildlife’s 28-year forage fish survey (1987-2015) to compare demographics of rainbow smelt populations in the Main Lake, Malletts Bay, and the Northeast Arm.

The authors also relied on data from the Lake Champlain Long-Term Water Quality and Biological Monitoring Project to describe each basin’s habitat in terms of temperature, oxygen, and food availability. The long-term monitoring project, initiated in 1992, is supported by the Vermont Department of Environmental Conservation, New York Department of Environmental Conservation, and Lake Champlain Basin Program.

“We were able to compile several long-term datasets from different programs,” said Bruel. “Having data on rainbow smelt catches and environmental parameters for each year from different regions of the lake was incredibly useful for our study.”

Despite their contrasting nutrient levels, both the Northeast Arm and Malletts Bay have high densities of zooplankton, the main food source for rainbow smelt and alewife. However, the two basins have an extensive hypoxic (low oxygen) zone formed when water warms in the summer. Low oxygen limits available habitat for fish, and predators are rarely found there during the summer.

The 28-year smelt survey covered periods with and without alewife. In each basin, fisheries biologists conducted boat trawls with nets to catch and count rainbow smelt and to assess the size and age structure of the population. Data were made comparable by using a reference unit, catch per unit effort (CPUE), which is the number of individual fish caught per 55 minutes of trawling. Researchers compared catches of rainbow smelt before and after alewife invasion.

Declines in rainbow smelt were primarily attributed to increased mortality of rainbow smelt during their first year of life. Because of the differences found among basins, the native vs. introduced status of the two fish species did not explain the impacts of alewife on rainbow smelt.

The authors of the study turned to the different basin’s characteristics to understand what might be causing the patterns in catches across the basins. Predation by top predator fish, nutrient levels, and competition for resources alone could not explain the differences in catches. A greater food supply of zooplankton in both the Northeast Arm and Malletts Bay also did not prevent rainbow smelt population decline.

Instead, research results reveal that the impact of alewife on rainbow smelt is environment-dependent. Factors tied to habitat availability are the best answers to explain why rainbow smelt responded differently to an alewife invasion in the Main Lake than in the smaller basins.

Higher summer temperatures and lower oxygen levels limit available habitat in the smaller basins, which may increase alewife and rainbow smelt overlap and competition. The larger habitat in the deeper Main Lake supports the presence of predators and a Mysis food source and limits smelt and alewife interaction.

“Our findings indicate that habitat availability may play an important role in the relative impact of invasive species, such as alewife,” said Bruel. “Fisheries managers must think about not only which ecosystems are more vulnerable to invasion but also which ecosystems, once invaded, are the most likely to be impacted by that invasive species addition.”

University of Vermont Rubenstein School; Institute of Ecology and Environmental Sciences of Paris