Lake Acidification: Ecosystems Before, During, and After 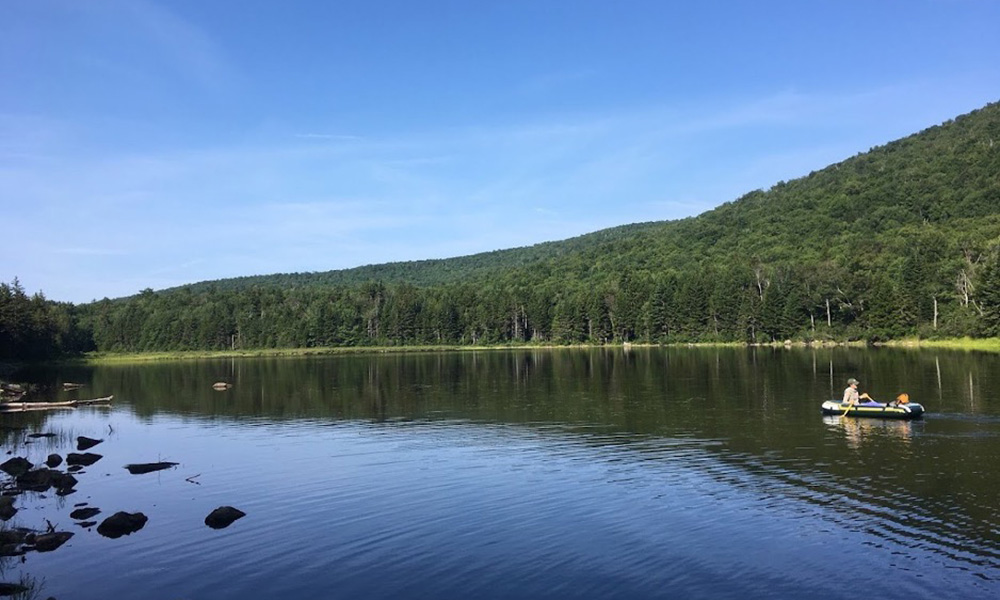 “Lakes are sensitive to environmental pressures and can rapidly integrate changes from their surrounding watersheds and the atmosphere,” explains Sydney Diamond, the lead author of a recent study on a Vermont lake’s response and recovery from acidification. “This makes them a great site for long-term ecological monitoring of large-scale change.”

Lake acidification occurs when sulfur and nitrogen compounds from industrial activity get into precipitation and eventually into lakes. The pH of the water decreases and can result in a loss of biodiversity which can alter ecosystem structure and function. While many lakes are now recovering from acidification that took place before the Clean Air Act and subsequent Acid Rain Program successfully reduced nitrogen and sulfur oxide emissions that caused acid rain, the biological recovery of lakes has not been well documented.

Biological recovery may take longer to return to pre-acidification composition than chemical recovery. Biological systems must respond to chemical changes, so there is often a lag in recovery time—or they may not return to pre-acidification conditions at all but rather shift to a new assemblage of species due to changing external pressures. Little is known about the relationship between acid recovery and climate change in lake ecosystems.

Sydney Diamond and Ana Morales-Williams of the University of Vermont’s Rubenstein School of Environment and Natural Resources investigated how recovery from acid rain deposition and climate change interact to impact the species dynamics of acid-impaired lakes. Documenting how lakes are recovering from acidification in the climate change era can help researchers predict how these systems will react to upcoming stressors such as increased cyanobacteria blooms and invasive species.

Diamond and Morales-Williams focused on Beaver Pond, a geographically isolated montane lake in Holland, a town in northeastern Vermont. Due to its location, Beaver Pond contains only atmospheric nutrient inputs with little chance of human-caused nutrient runoff.

Beaver Pond is one of twelve acid-impaired lakes that the Vermont Department of Environmental Conservation’s Long-Term Monitoring program has sampled since 1983. Program staff measure indicators of chemical recovery in the lakes they sample. The research team utilized these data in their chemical analysis of the lake. The team supplemented the long-term data with their own field sampling to compare the chemical and biological composition of the lake before, during, and after acid deposition. They collected sediment cores to identify shifts in the biological community composition and changes in sediment geochemistry in the past 180 years.

The researchers split the data into three discrete periods; pre-acidification dated before the 1910s, acidification during 1911–1990s, and recovery from the 1990s to present. Each period had distinct chemical and biological characteristics that the researchers compared. They analyzed chemical and biological data from as far back as 1840, which is critical for understanding the development of the ecosystem.

Some chemical recovery occurred immediately after the Acid Rain Program was implemented in 1990 whereas other indicators such as pH did not fully bounce back until the early 2000s, more than ten years after the Acid Rain Program began. Long-term water chemistry analysis indicates that both pH and dissolved organic carbon concentration in Beaver Pond increased over the monitoring period, and the greatest rate of increase for both variables occurred between 2001 and present.

The researchers found evidence of both chemical and biological recovery in the lake. By analyzing algal microfossils in sediment cores, they found that acid-intolerant species have increased, and acid-tolerant species have decreased since 1990. This suggests the assemblage of algal species fluctuates with the shifts of chemical levels in the lake. While the lake is experiencing biological recovery, the species assemblage post-acidification does differ in composition and abundance when compared to pre-acidification. External changes in the environment such as human caused climate change may drive these changes, but the primary driver of species composition shifts has been due to acidification and recovery.

This study exemplifies the importance of long-term monitoring for understanding ecosystem trends and the role of human disturbance in these trends. These data will help establish baseline and threshold lake ecosystem response metrics to acidification.

“Several questions remain unanswered regarding long-term changes in our study system,” explains Diamond. “Although we can conclude with certainty that Beaver Pond is recovering from acidification, continued biological monitoring will better explain the biological response to these trends.”

Ongoing research in the Morales-Williams laboratory is using sediment cores from more than 100 Vermont lakes to assess long-term environmental change at a landscape scale. In collaboration with the Vermont Department of Environmental Conservation, UVM Rubenstein School M.S. student Ismar Biberovic is reconstructing the history of Vermont lakes by analyzing their diatom record—a type of algae with glass cell walls that are well preserved in sediment. Because diatom species have known tolerance ranges for environmental stressors, they can be used to model past conditions, including nitrogen and phosphorus concentrations and pH.  Preliminary results indicate that the greatest shifts in diatom composition across the state between pre-industrial times and the present are predicted by pH and nitrogen, and that shallow lakes appear to be the most sensitive to long-term change.

Adam Heathcote, Director of the Department of Water and Climate Change

University of Vermont Arts and Sciences