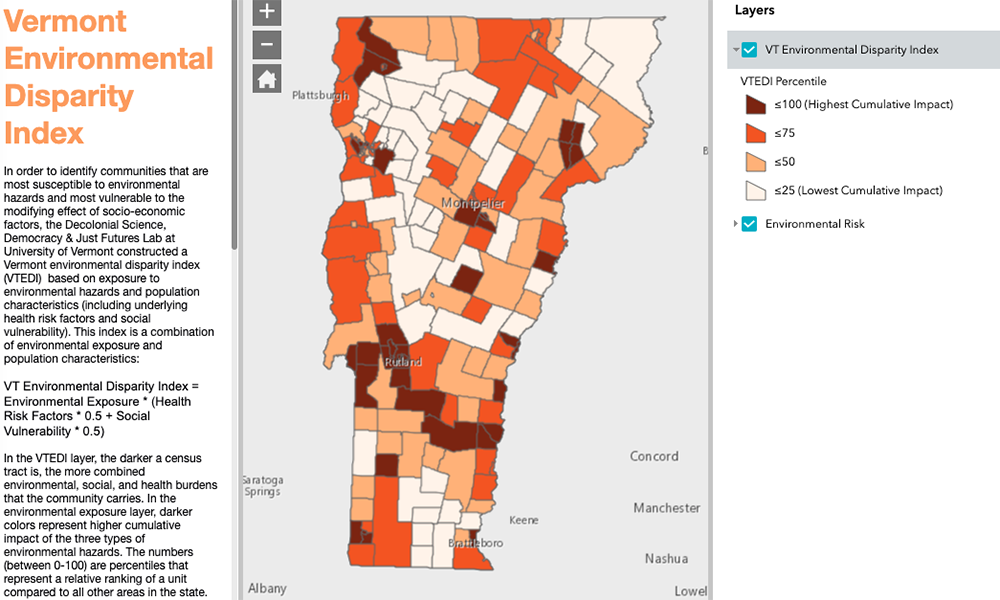 In 2016, the Vermont Department of Environmental Conservation (DEC) needed to develop an environmental justice policy to fulfill an EPA requirement. Researchers at the University of Vermont (UVM), in partnership with Rural Environmental Justice Informed by Community Expertise (REJOICE), assisted the DEC and conducted a study of environmentally vulnerable populations in the state. This recently published research led to the new state law and development of the new mapping tool called the Vermont Environmental Disparity Index.

The mapping tool revealed that population areas with high environmental risks are concentrated in the Burlington metropolitan area of Chittenden, Franklin, and Grand Isle Counties; Washington County; and central Rutland County. Areas of high environmental risk were also found in parts of Caledonia, Orange, and Bennington Counties, and along the Connecticut River Valley in Windsor and Windham Counties.

Specifically, population areas with more minority, non-white, and LEP residents are more likely to have higher exposure to poor air quality and polluting sites and are more vulnerable to rising temperatures.

“This study demonstrates that regardless of the stature of Vermont as an environmentally progressive state, the five percent of its population that is non-white still bears higher environmental risks to legacy environmental pollutants,” said Panikkar.

Conversely, Vermonters living below the poverty line and using food stamps are less likely to experience air pollution or have polluting sites nearby but can be more vulnerable to heat. Population areas with the greatest poverty levels tend to have high levels of lead in school drinking water but are less likely to experience flooding and impaired surface water. Traffic noise did not show any clear patterns in the study.

The study found little overlap between high minority communities and low-income communities. Some census tracts in the rural north and northeast of the state are in the high poverty range, where environmental risks such as polluted sites and air toxins are relatively low. Communities with greater non-white populations are largely concentrated on the edges of urban areas.

“While there is little correlation between race and poverty in this study, it should not be interpreted that non-white populations are economically better off than white populations in the state,” said Ren. “It could be that poverty within these racially diverse tracts is not easily visible, as parts of the population within the tract have higher incomes.”

“Mapping is one way to understand environmental risks based on available spatial data, but not all data are easily available, such as how environmental benefits are distributed, so it is important to engage communities in these activities through participatory mapping exercises,” said Panikkar. “It is also important to understand the limitations within this tool and take quick action to alleviate disparities and prevent stigmatizing communities that have cumulative risks. With additional funding, community engagement, and community-based solutions, we can address local environmental justice concerns on the ground and work to redress environmental injustice.”

Dr. Ren serves on the Racial Disparities in the Adult and Juvenile Justice System Advisory Panel for the State of Vermont.

As one of the founding members of REJOICE, Dr. Panikkar continues to partner with local community groups such as the RENEW BIPOC Coalition, RELEAF, Vermont Natural Resources Council, the Environmental Justice Steering Committee organized by REJOICE, and Vermont State agencies as they work towards implementing the environmental justice law.

University of Vermont, Rubinstein School of Environment and Natural Resources

University of Vermont Rubenstein School and Gund Institute for Environment