Urban areas are prone to flooding as a result of impervious surfaces – roadways, driveways and parking lots, and roofs. High precipitation events, in particular, can cause stormwater sewers to back up and flood roadways. Aging infrastructure as well as historic changes to the landscape can exacerbate sewer and roadway flooding. 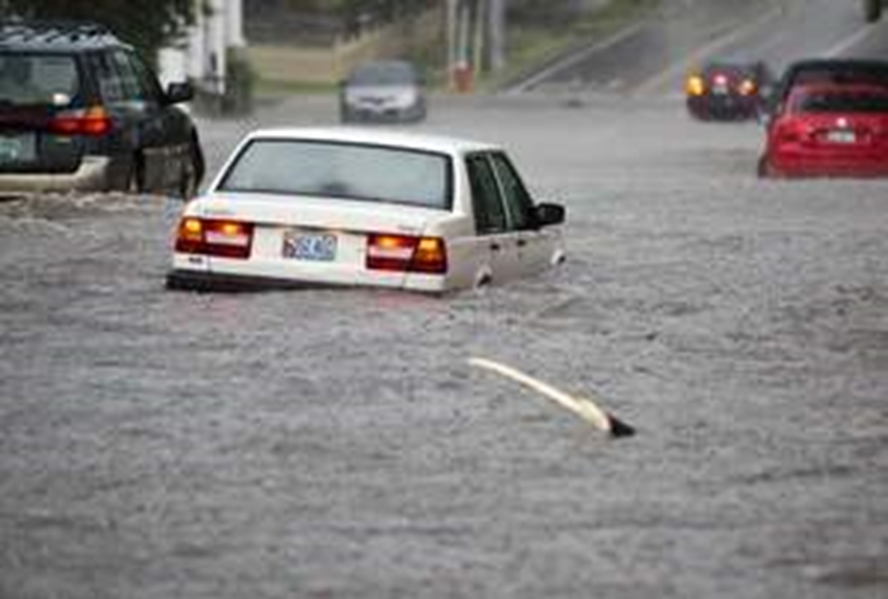 Researchers from the University of Vermont, the National Weather Service, and Burlington Department of Public Works collaborated to analyze historic heavy rain events that corresponded with flooding in Burlington, Vermont.

Six discrete flood events occurred in Burlington in a one-year period (4 July 2012 – 4 July 2013). Following these events, the City of Burlington began a review of the sewer system and hydrologic models to better manage sewer lines and develop improvement plans. Researchers investigated the observation that several locations across the city are prone to roadway floods. Flood-prone locations were used to prioritize mitigation projects.

A historic ravine was buried during the 19th century as the City of Burlington was developed. The researchers used historic images of Burlington to identify the ravine and map the original topographic features. Two-foot contour lines were layered with infrastructure determine how topographic features affect drainage. Many of the recurring flood locations are located in areas along the historic ravine. As infrastructure was updated, modern sewer lines were routed away from the ravine to improve sanitation. However, the new sewer lines follow a terrace across the city, which does not have a steep enough slope to drain well. City employees observed frequent floods along the modern sewer line, in particular where it intersects with older sewer lines.

Newspaper reports of floods, which included specific locations, were aligned with precipitation records from the National Weather Service. Sixty-seven heavy rainfall events, defined by a rate of 1 inch per hour, were identified between 1948 and 2013. The amount of rain that fell, and the time period (hours to days) that it fell in was aligned with the observational reports of roadway floods.

Researchers determined that short-term bursts of 1 inch of rain in 30 to 45 minutes were most likely to overwhelm the stormwater sewer system and cause local flood events at the observed flood-prone locations. Rain events that occurred over a longer period of time (days) less consistently resulted in flooded roadways. Multiple factors may cause the differences between short-term bursts and longer wet periods, including soil inundation and season. Amount of impervious surface in an urban setting is also a driver of roadway floods as stormwater sewers are overwhelmed.

The research supports the observations that short bursts of precipitation lead to flooded roadways, especially in the area of the historic ravine and the sewer lines that do not have enough elevational change. The information can aid future infrastructure and development plans to prioritize these areas for improvements. Weather prediction data can also be used to anticipate roadway floods and allow for preparation.