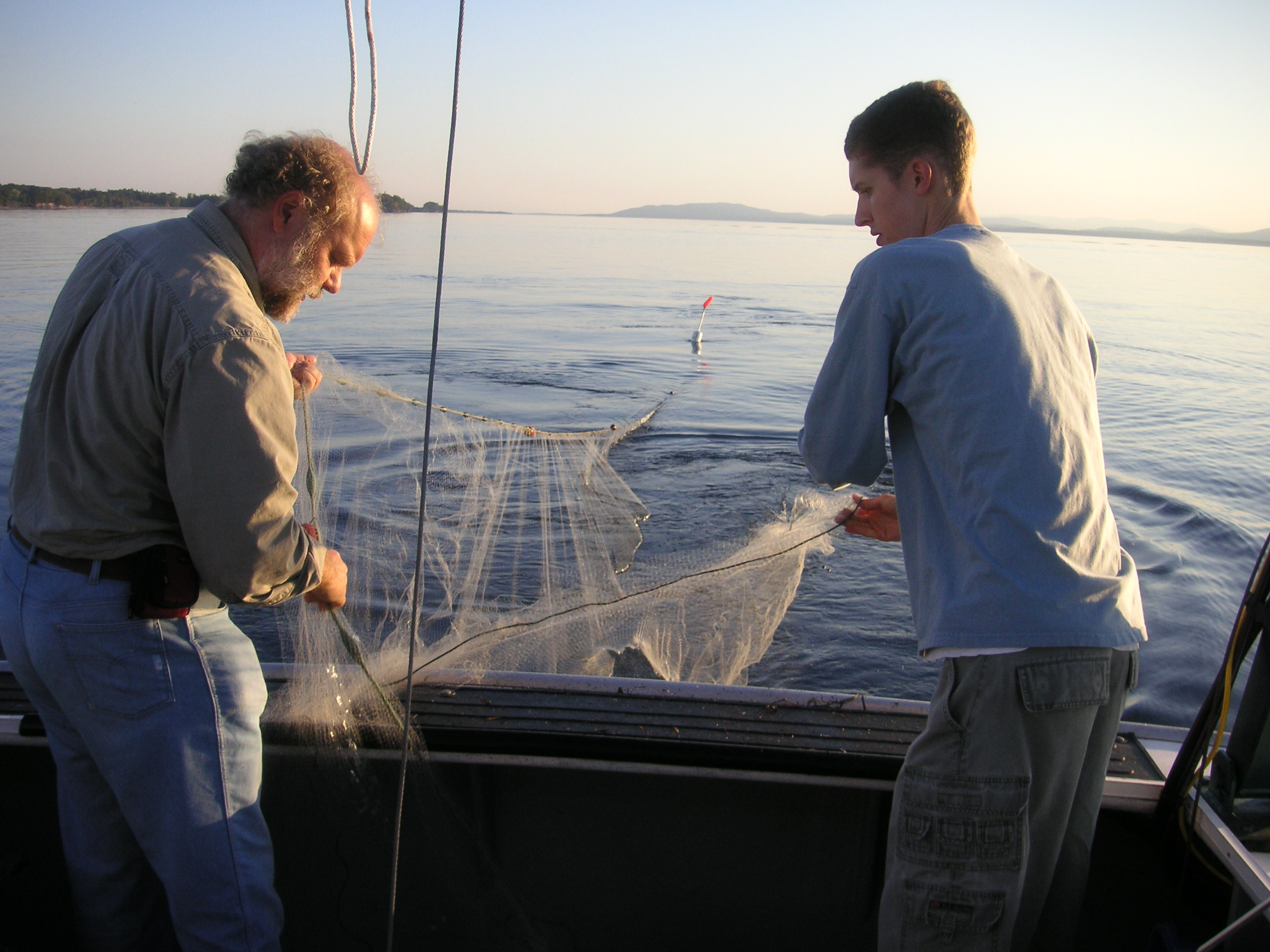 The first year of a fish’s life is crucial to its survival. After hatching, most fish will not survive their first few months. Understanding the complex factors impacting population survival rates in the first year can help inform best management practices that support healthy lake ecosystems. Comparing alewives and native rainbow smelt populations in Lake Champlain, recent research investigated interactions between fish growth, hatch timing, and first-year mortality. This research was a collaboration between the USGS, Vermont Cooperative Fish and Wildlife Research Unit (Donna Parrish) at UVM, Cornell University (Paul Simonin, Lars Rudstam, and Pat Sullivan) and the Vermont Department of Fish and Wildlife (Bernie Pientka).

Individual mortality in the early stages of life often corresponds with the amount of time a fish spends vulnerable to predators (sometimes including adult members of the same species). Growth increases a fish’s chances of survival. Larger, faster-growing and faster-developing individuals are more likely to survive exposure to predators. Predation, food availability and water temperature all vary seasonally. Therefore, growth and mortality rates are, in turn, a function of hatch timing (when an individual fish hatches during a season).

While rainbow smelt are native to Lake Champlain, alewife first appeared in 2003. The introduction of alewives in other lakes has affected native fish populations through predation and competition. This research studied how these species interact through their first growing season and how the introduction of alewives affects the population dynamics of native rainbow smelt in Lake Champlain.Alewife and rainbow smelt are two ecologically important open-water fish species in many temperate lakes across the U.S., including Lake Champlain. Both species provide food for salmonids and walleye, while feeding on zooplankton and first-year fish (fish hatched within the past year but not yet a year of age). However, few studies have explored how such factors impact survival of these two key species during the first year. This research investigated and compared the hatch timing, growth rates and first-year mortality rates of each species to infer year-class strength and subsequent species interactions based on hatch timing.

Alewives had a higher mean mortality rate (5.5%/day) in the first 45 days of life compared to rainbow smelt (3.4%/day). However, earlier (versus later) hatching rainbow smelt faced higher daily mortality rates. Hatch timing did not affect mortality rates for alewife. These results would likely change from year to year based on variable conditions like the number of predators and water temperature.

"The high mortality rates experienced by young rainbow smelt and alewife is something we expected to find, but our detailed understanding of the daily and seasonal distribution patterns of these species allowed us to more clearly connect the dots between factors causing this mortality. Alewife predation is now one of those factors, but this predation is only possible when adults and young fish are near each other, and that doesn’t happen all the time." - Paul Simonin

The researchers suggest that cannibalism is the primary threat to first-year rainbow smelt survival in Lake Champlain. Cannibalism is more likely when the preferred light and temperature conditions for first-year and adult fish overlap. For rainbow smelt, this spatial overlap is highest early in the season (before the lake becomes thermally stratified) and at night (when the adults migrate closer to the surface). Therefore, earlier hatching fish face an increased threat of cannibalism, decreasing their chances of survival. Historically, rainbow smelt in Lake Champlain have hatched later in the season to avoid this threat. However, the introduction of alewives, which prey on later hatching rainbow smelt, may be altering this pattern.

Vermont Department of Fish and Wildlife