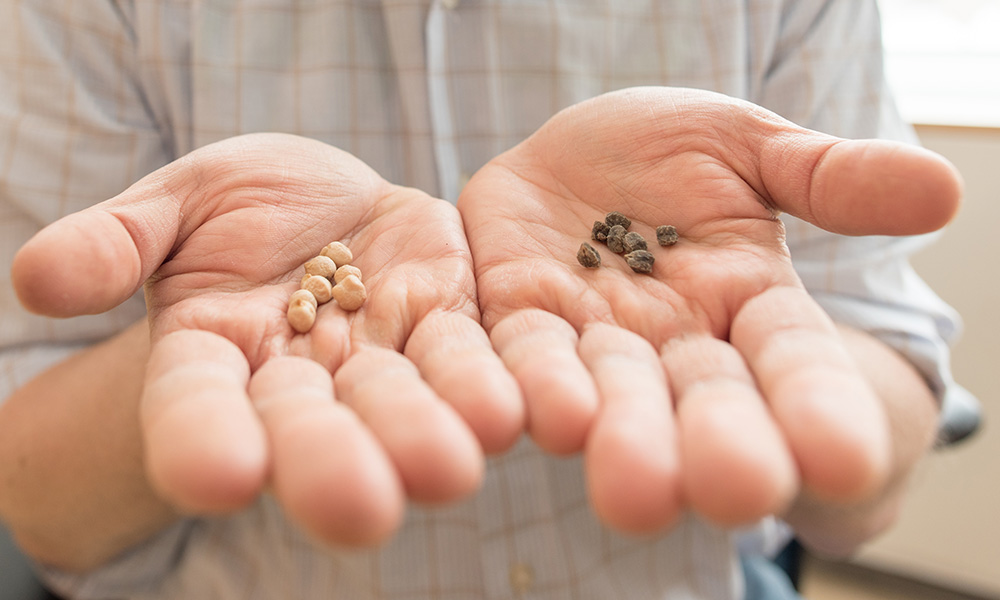 With climate change threatening intense storms and droughts and the COVID-19 pandemic revealing the failures in our supply chain, food insecurity is an issue of increasing relevance worldwide. Crop diversity, like diversity in other aspects of life, is fundamental to promoting a sustainable, resilient food system and combating food insecurity.

Historical examples demonstrate the severe consequences that happen when we overlook crop diversity. The Irish potato famine in the 1840s, one of the most prominent examples, was exacerbated because farmers almost exclusively grew one variety of potatoes—the Irish Lumper potato. When a fungus attacked this variety of potatoes, there was no alternative food source large enough to make up for the loss and as a result more than 1 million people died.

This doesn’t even begin to describe the nutritional, cultural, and environmental reasons to diversify crops. Despite this knowledge, if you drive across the United States, you pass huge swaths of monoculture farms. Nearly 57% of the crops being grown here are one of two things: corn or soybeans. There has been a decline in crop diversity for decades, and this issue is being mirrored worldwide.

To better understand crop diversity in Vermont, a team of researchers from the University of Vermont—Carina Isbell, M.S. candidate and research assistant in Community Development and Applied Economics (CDAE); Daniel Tobin, Assistant Professor in the CDAE Department; and Travis Reynolds, Associate Professor in the CDAE Department—conducted a survey which aimed to answer the questions: who are the individuals in Vermont that are conserving crop diversity; what are their motivations for doing so; and is there a connection between the type of motivation and increased crop diversity?

With a response rate of 62%, the study had 151 complete responses to analyze. Of respondents, 88% identified as non-commercial farmers. According to the USDA, a commercial farmer has an established farm income of at least $1000 from the regular harvest and sale of crop, nursery, livestock, or aquaculture products. Non-commercial farmers are a group that has been unaccounted for in crop diversity and seed savings conversations thus far.

To determine crop diversity in farms and gardens of respondents, the researchers measured species richness which is simply the number of crop species being grown. They found there was a lot of variation in crop diversity of different respondents, ranging from growing just a few crops to as many as 44. The ten most common crops grown were: garlic, common beans, tomato, squash, peas, lettuce, pepper, potato, onion, and cucumber.

The motivations amongst respondents to diversify crops were equally variable. The researchers measured 29 different motivations which were categorized thematically (economic, environmental, cultural, personal, community, and political motivations) and based on the degree to which they were private or public motivations. The researchers found that, for survey participants, producing food for home consumption and planting material for a home farm/garden was most important while making money and market demand were least important.

Researchers found private benefits have the strongest association with crop species richness, and cultural motivations explained the most crop diversity. For the most part, respondents’ motivations were mixed and categorizing them as private or commercial did not account for the complexity of human motivations. Motivations to maintain crop diversity are multidimensional regardless of how they are categorized.

“Our findings suggest that more diversity likely exists when non-commercial activities are taken into consideration,” says Dan Tobin of the University of Vermont, “and that, when understood and invested in, could increase the resilience of agricultural systems.”

The findings of this study, while exploratory, do mirror the findings of similar studies in the global south which indicate that focusing solely on commercial farming in crop diversity could be misguided. It challenges the idea that economic incentives are the most effective way to increase crop diversity. Focusing our efforts and policies on promoting crop diversity in response to the needs and motivations of home gardeners and small-scale farmers could be more effective.